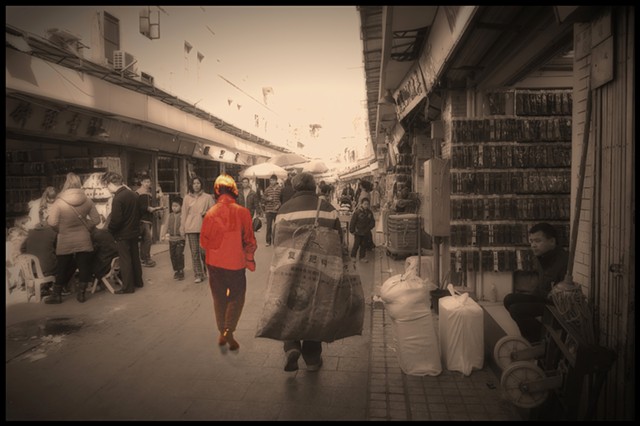 In January 2014, I went to Guangzhou, China to look for the places that I heard about from family stories. For this ephemeral art project, I followed what I had heard from a particular story. My maternal grandmother had a tragic childhood living with her aunt. She ran away and was missing. Then one day someone found her near death passed out on the temple steps and told her grandmother. Great-great grandmother slowly nursed her back to health. After Grandmother survived, she went to work for her uncle at Gou Dai Gai (Street), a bustling artisan commercial street. There is more to the story which I plan to include in a future performance.

When I walked this street in January 2014, I got about ¾ down the street and had to stop. My sight blurred and my vision rose slowly above the street, like a film camera view rising and panning an overhead scene. I saw myself and then I saw my grandmother as a young teenager. We were walking toward each other. Then I was back on the ground and she was gone. I started to cry uncontrollably, deeply overcome with emotion.

Perhaps in the early 1930s, Grandmother was walking down Gou Dai Gai and paused at the same spot to meet me in 2014: the time span of eighty years collapsing into a single moment of memory and place.