Book Arts > The Book of the World 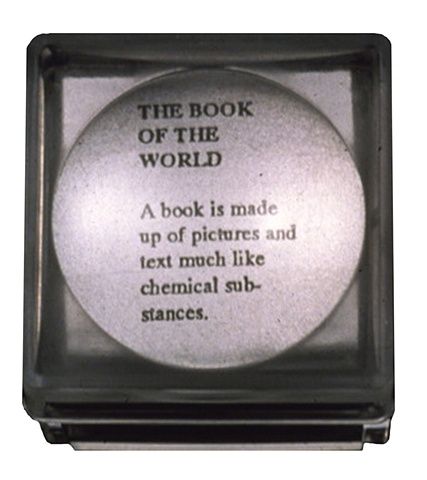 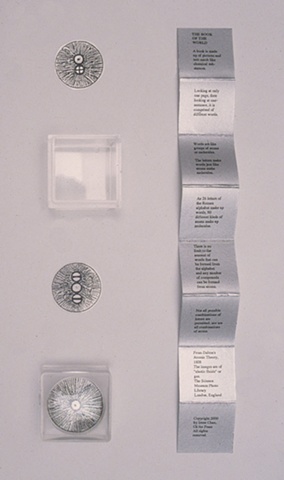 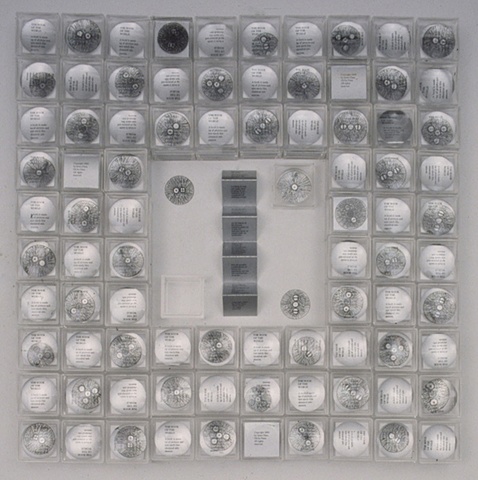 2000 In his 1808 Atomic Theory, the English scientist John Dalton described the world as composed of molecules and atoms much like a book is composed of letters and words. The text is on silver paper and the images are on transparent paper in magnifier boxes. This is a series of 100 miniature books with images of Dalton's elastic fluids drawings that look like the eye.

From essay "Size Matters" by art historian Dr. Stephen J. Bury, Head of European and American Collections at The British Library, London at the time of this writing. He is currently the Andrew W. Mellon Chief Librarian of the Frick Art Reference Library in New York City: "… Chan’s book is ‘of the world’ i.e. the whole world is contained in the book. Chan’s point of departure is John Dalton’s metaphor in his book on atomic theory, A New System of Chemical Philosophy (1808), in which he compares molecules and atoms to words and letters, The Book of the World extends this comparison, both the 26 letters of the Roman alphabet and the 90 atoms are combinable to make words and molecules, but not all combinations are permitted. A silver leperello structure holds the text, which surmounts images on transparent paper of Dalton’s ‘elastic fluid’ and gas. Both are contained in a ‘bug box’, the naturalist’s small clear container for samples – ants, moths, beetles, etc. – with the lid’s convex lens acting as an inbuilt magnifying glass. This is multum in pavo, the world in a grain of sand. The natural world and the world of the imagination (where the reader can forget him/herself in the world/s created by the author together with the reader) are continuously substituted one for the another. The simplicity in idea and execution of Chan’s project stands in stark contrast to the literally overwrought graphic design of [Josua Reichert’s] so-called smallest book in the world."