Works on Paper > The Thomas Project 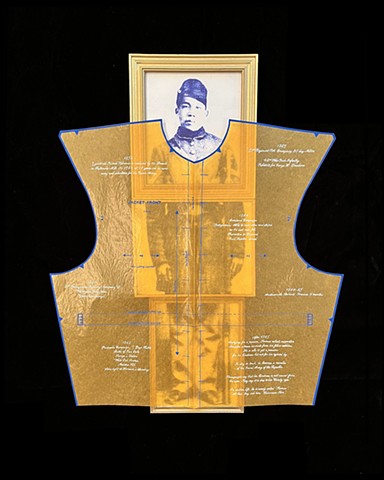 This is a fine art print of Thomas in his Civil War uniform. Layered on top is a Civil War jacket sewing pattern that tells details about Thomas’ experience during the war.

1852 7 years old Thomas Sylvanus is enslaved by the Duvalls in Baltimore, MD. In 1861, at 16 years old he runs away and volunteers for the Union Army.

After 1865 Applying for a pension, Thomas collects supportive character witness accounts from his fellow soldiers. He is able to get a pension for his blindness but not for his injured leg.

To stay in touch, he becomes a member of the Grand Army of the Republic.

Townspeople say that his blindness is not caused from the war. They say it is due to his Chinky eyes.

In civilian life, he is rarely called ‘Thomas’. At best, they call him ‘Chinaman Tom’.